We share and address articles that are of interest to us here at WildAid and we consider relevant to our readers since they have an association to biodiversity and wildlife welfare. Though we are a registered charity and our work is fixed in the UK the un-precedented destruction of Australia's wildlife and wild places from the bush fires is alarming and has un-warranted pressure for wildlife carers:

Around 480 million animals are feared to have died in the bush fires sweeping Eastern Australia.

Ecologists at the University of Sydney estimate around 480 million mammals, birds and reptiles have been killed, directly or indirectly, by the devastating blazes since they began in September 2019.

This includes almost 8,000 koalas, which are believed to have burnt to death on the state’s mid-north coast. The region, which lies around 240 miles north of Sydney, is home to the largest number of Australia’s koalas, with a population of up to 28,000.  Up to 30 per cent of the population in that region" may have been killed, because around 30 per cent of their habitat has been destroyed.
The mid-north coast region also houses one of the country's main koala hospitals. Dedicated workers at The Port Macquarie Koala Hospital reportedly treated 72 badly burnt animals on Christmas Day 2019 “We have teams on roster for capture if any are in trouble and they are available 24 hours a day,” clinical director Cheyne Flanagan told Reuters.
According to Mark Graham, an ecologist with the Nature Conservation Council, koalas “have no capacity to move fast enough to get away” from fires that spread from treetop to treetop.

“The fires have burnt so hot and so fast that there has been significant mortality of animals in the trees, We will probably never find the bodies,” Mr Graham told a New South Wales parliamentary inquiry earlier in December 2019.

“We’ve lost such a massive area of koala habitat that I think we can say without any doubt there will be ongoing declines in koala populations from this point forward.”

The scorched regions include nature reserves in the Greater Blue Mountains World Heritage Area and parts of the Gondwana rainforests — which have existed since the time of the dinosaurs and are the most extensive area of subtropical rainforest in the world.

The exceptional cases of injured and mortally wounded wildlife demonstrates the professional conduct of all involved in animal and wildlife welfare. We ought to recognise this to all those across the world. 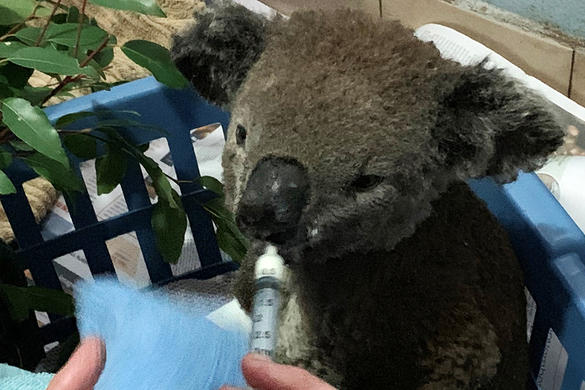