Convert 50% of the UK farmland to nature

We share and address articles that are of interest to us here at WildAid and we consider relevant to our readers since they have an association to biodiversity and wildlife welfare:

A former chief scientific adviser to the UK government recently stated that half of the nation’s farmland needs to be transformed into woodlands and natural habitat to fight the climate crisis and restore wildlife.

Prof Sir Ian Boyd said such a change could mean the amount of livestock would fall by 90%, with farmers instead being paid for storing carbon dioxide, helping prevent floods and providing beautiful landscapes where people could boost their health and wellbeing and wildlife thrive.

Boyd said the public were subsidising the livestock industry to produce huge environmental damage. The professor spent seven years at the Department for Environment, Food and Rural Affairs (DEFRA) before stepping down in August 2019. Half of farmland, mostly uplands and pasture, produces just 20% of the UK’s food and would be better for used other public goods, he said.

He said: “We need a large, radical transformation and we need to do it quickly, in the next decade."

Farmers argue that uplands and pasture where livestock are reared cannot be used to grow crops. But Boyd said: “It would be much better to store carbon and water, grow trees and make the land available for people to improve their health and welfare.” It seems to make very good sense to us.

Vertical farms: He said the 20% of food production lost by converting half of farmland could be made up by the development of vertical farms where food is produced indoors in controlled and more efficient conditions. Boyd said:“ I know there are big companies looking at how to really scale this up.”

A series of studies have concluded that people in rich nations need to eat much less meat to tackle the climate emergency as well as improving health. “Most of the livestock production in the UK is unprofitable without public subsidy,” said Boyd. “The public are subsidising the production of livestock to produce huge environmental damages, all the way from greenhouse gas emissions to water pollution"

“If anybody asked me: ‘If there is one thing I can do to help save the planet, what would it be?’ I would say just eat a lot less meat. It’s the easiest thing to do.

People could reduce the meat they eat by 90% and have a healthy diet, Boyd said: “Freeing up 50% of the land would probably result in a reduction in the amount of livestock by about that amount, because it would be mostly livestock land we would be taking out of production.”

Farmers ought to be paid for changing the way land is used, he said. Current subsidies are largely based on the amount of land owned, but the government has pledged it will move to a system based on public money for public goods after the UK leaves the EU’s subsidy regime.

Farmland covers 70% of the UK, meaning that converting half of the land to woodlands and parks would create new landscapes across a third of the country. In May, a report from Re-Wilding Britain called for a quarter of the nation to be returned to natural habitat.

The National Farmers Union recently published its plan to end the climate-heating emissions from agriculture by 2040. It said this could be done without cutting beef production or re-wilding large areas of farmland into forest. Instead, the NFU said 75% of the UK’s agricultural emissions could be offset by growing plant fuel for power stations and then capturing and burying the carbon dioxide.

Responding to Boyd’s proposal, Guy Smith, the NFU’s deputy president, said: “Urgent action is needed to tackle the climate emergency. British farmers are already some of the most sustainable in the world. For example, the beef produced in Britain is already 2.5 times more efficient than the global average. And they are committed to doing even more.

“However, we will not halt climate change by curbing sustainable, British production and exporting it to countries which may not have the same climate ambition as we do here.”

Boyd said: “This proposal is not about being negative about farmers. It’s about being positive about their futures and helping them to adapt and continue providing support for society, but in a different way from in the past.” 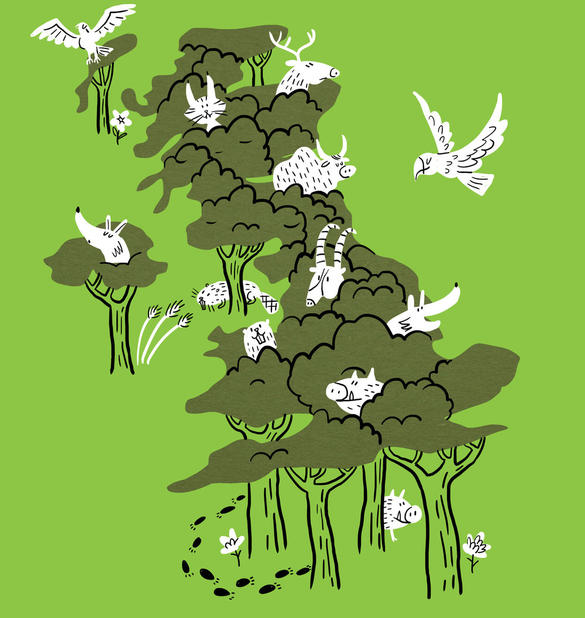