Will Wildcats be reared for release in England and Wales?

“If any beast has the devil’s strength in him it is the wildcat,” wrote a 15th-century hunting author – but facing extinction due to historic persecution the WildCat could be due to return back into the wild, in Britain where it has not roamed for 150 years.

A feasibility study by the Vincent Wildlife Trust has identified rural Devon and Cornwall and mid-Wales as having the best habitats for the Wildcat, which has not been recorded in southern England since the 16th century. Contrary to popular belief, the Wildcat does not require dense forest but prefers a mosaic of well-hedged farmland.

The last remaining Wildcat population in the Scottish Highlands has been judged 'non viable' since early 2019 by the International Union for Conservation of Nature (IUCN), with 30 wild animals showing a high degree of hybridisation with domestic cats.

European wildcats are native to Europe and are larger than domestic cats, which are actually descended from the “tamer” subspecies of African wildcat.“Wildcats look like the kitty at home but they are like leopards,” said Hartmann, who sits on the IUCN cat specialist group. “I’ve been working with leopards for many years and the only difference is size, and that leopards can get tame. If you hand-raise lions or tigers, they remain tame for the rest of their lives. Wildcats cannot be tamed under any circumstances. This is very special.”

Wildcats roaming through the countryside might concern sheep farmers but, according to Hartmann, they never take lambs. They would only pose a threat to free-range chickens, and unlike foxes they only take one at a time. Wildcats would even favour taking prey such as rabbits and rodents.

Challenges do lay ahead: The first is to breed the easily stressed Wildcat in captivity for a long-term 'soft' release programme. Hartmann supplied more than 100 captive-bred cats during a 20-year reintroduction effort that put 700 wildcats back into German forests. Its wildcat population is expanding and moving into the Czech Republic.

Hartmann encourages rehabilitators to talk softly to each wildcat and trains the young to hunt using an automated feeding programme and to include natural enrichment. A dead mouse is ejected from a box at random, the carcass bouncing on a piece of elastic. It teaches each wildcat to wait silently, before pouncing and unleashing its “killing bite” on the mouse’s neck.

Derek Gow, an ecologist responsible for breeding and reintroducing vulnerable Water voles in many parts of Britain has established a new wildcat facility in Devon with three pairs and is calling for a captive-breeding push to support a reintroduction programme.

“We need to bring animals from Swiss and German zoos, build up a stock and have captive cats that are capable of producing 150 kittens a year,” he said. “I can produce 3,500 water voles a year if required. We’ve got the land to do it but we’ll find other project partners.”

The Royal Zoological Society of Scotland is already breeding Wildcats. The environmentalist Ben Goldsmith, an adviser to the Department for Environment, Food and Rural Affairs (DEFRA) is supporting the breeding programme.

Gow has followed her advice and increased the number of dens in his enclosures to provide the Wildcats with additional concealment and a sense of security. Hartmann’s female cats produce four kittens a litter whereas most captive wildcats produce only one or two.

The biggestchallenge for Wildcats is hybridisation with feral domestic cats, which conservationists would have to remove in large numbers from reintroduction areas.

Hartmann, however, says the risks of hybridisation are overstated. Male Wildcats will usually kill any domestic cats they encounter except during breeding season when, if they cannot find a female Wildcat, they will mate with a domestic cat. Conservationists believe the Scottish Wildcat population became so hybridised because it was reduced to such a low level by perescution, pushing the males to roam widely and mate with feral cats.

“There’s nothing left of the Scottish population,” said Gow. “It’s been a good effort, but this is the last-chance saloon and we need to do things completely differently and have a big viable captive breeding population. We need to start doing this kind of restoration right now and on a much grander scale than we’ve ever contemplated before.”

Defra is currently developing a code of best practice for reintroduction and translocation projects but because the wildcat is still found in the wild in Scotland, a licence will not be required to release them in England.

A Defra spokesperson said: “The movement and release of any species in England, including wildcat, should follow the International Union for Conservation (IUCN) of Nature guidelines. These guidelines ensure there are clear environmental and socioeconomic benefits to gain from releasing the animals and that their welfare is maintained.”

Hartmann says the long-term project of bringing back the wildcat is 95% politics, 5% conservation and nothing to do with the actual animal.

“The most promising programme is in England and Wales. The wildcat was there historically, there is habitat left and the most challenging thing is the feral cats,” she said. “If you manage to control that, it can be a big success but a reintroduction is a lifetime’s work. It’s 20 to 30 years. It’s not just releasing animals.” 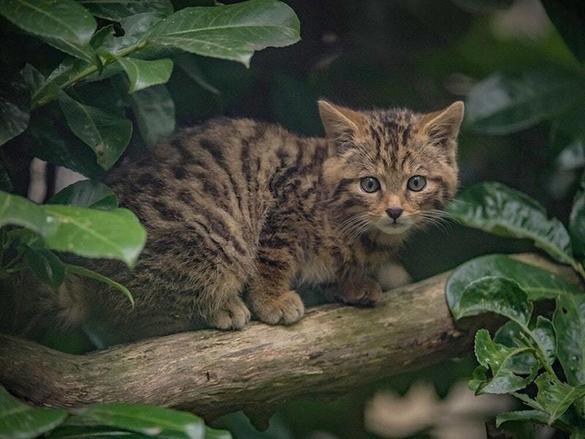